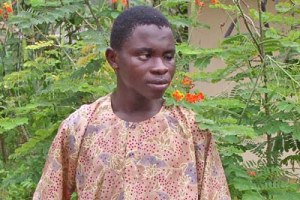 Hi to all of you that showed interest in the fifteen year old boy by the name of Nse here in Palmgrove a couple of months ago. The boy was taken to an eye specialist who suggested an eye operation. A date was set and before the operation a team of doctors made a final analysis. The discussion was, that the operation, being a high risk one and not sure of the end result, they referred him to another hospital where missionaries come to do such complicated surgery. The boy was taken there, arrangements were made, the missionaries finally came and again a review was made by them. The final decision was that an operation will not help. They gave us an address of a school for the blind in northern Nigeria and suggested to enroll him in their educational program. There they teach brail, typing and other courses of value to blind people. Even though this boy is not completely blind yet, it will prepare him for the future when he will be completely blind. Which will be sooner than wanted. We agreed to go ahead with this suggestion and are now processing the enrollment. The money donated has been used to pay all the doctor fees and will help for future expense. Thank you and God Bless. Edward Kleinsasser

July 13, 2006 Today while sitting with management here in Palmgrove a lady came in and asked to speak to us. We politely offered a chair and asked her what she would like. She told us that she is in need and knows no other place than Palmgrove to turn to for help. She told us that her oldest son, fifteen years of age, who has been attending Palmgrove School for many years now, had an accident. Several months ago he was riding a motorcycle when somebody rammed into them from the side and smashed his leg and knee. The Doctors have been wanting to operate but the issue is, no naira, no operation. Here in Nigeria one pays before the operation, so the boy was released because nobody came up with the money. Her husband seeing his son in the hospital and knowing it would cost a lot could not handle the situation and simply disappeared leaving the mother with her children behind to struggle on as best they could. The young man hobbles around and will never work if he cannot find help. He would so much like to finish high school, he has one more year to go and then hopefully he can find some form of employment. Is there anybody out there who could help. A few hundred dollars would go a long way in this case. Send to Palmgrove Christian services with a note saying what it is for. Box 10
Ste Agathe, MB
R0G1Y0
Edward Kleinsasser