More On Fruits Of The Land! 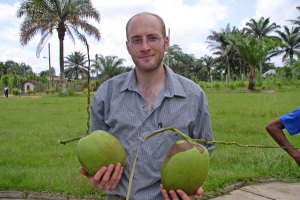 The pineapple has to be one of my favorite fruits, although I don’t think one can have a favorite, with so many good ones to choose from.They’re a lot juicier then the ones back home, so you don’t notice the acidy taste as much. When you bite into it, you have to make sure you’re sitting over the table because the juice runs all over the place leaving a sticky mess. It’s a very common plant around here, everywhere you look you can see it growing. The garden in Palmgrove has many, many pineapple. For fertilizer, they put what’s left over from the palm fruit around the base of the pineapple plant.

One thing I’ve learned to really like is coconut. Back home I never really had much of a taste for it. Coconut can be eaten before it’s fully matured, that is when the water inside tastes the best. The people around here really like the water of the immature fruit. When they open one, they eagerly raise it to their lips to have a swallow. If they have to share, then they like to pull and tug at it, taking turns drinking it until it’s finished and everybody somehow gets a fair share. The immature fruit is soft like uncooked meat. Here we have a picture of Emase showing us how to take apart an immature coconut. The matured fruit is nice and hard. The sooner you eat it, the more moisture it has. The water inside is really good, I don’t know how to describe it, it has somewhat of a ‘planty’ flavor to it. You’ve probably heard it referred to as coconut milk, well, it doesn’t taste anything like milk and it’s not white in colour, it’s a cloudy watery liquid.

The mango has always been a favorite of mine, oops, it looks like every fruit happens to be a favorite! Mango grows on huge trees. They are impressive to look at, with their branches reaching far out, to provide a cool shade in the hot environment. One can buy huge mangoes that are a beautiful yellow and red, or smaller ones that are still green but are already ripe to eat.

The Papaya grows on tall, straight trees and taste somewhat like a “plizela” but I think our “plizela” taste better. I had to get used to the taste, but now I like it. Papaya grows on top of the tree, in large clusters that hang downward. It’s very common here and they take it for granted because it’s so readily available.

When I think of sugar cane, I think of Cuba or South America, but it also grows here. The first time I saw it, I’was walking home from the corner and there were 5 little boys chewing away on something that looked like bamboo. I asked them what it was and they knew enough english to tell me that it was sugar cane. I asked for a small piece to try, so they cut me one. Then the older boy expertly sliced off the outer bark with his knife and give it to me. Its very fibrous, and you chew on it till all the juice is gone then you throw what’s left over away. It sure tastes good and it’s not overly sweet either. Later I got Ifiok, one of the “mandle”, to show me where they grow, so that I could get some pictures of it. As you can see in the pictures, it looks like a cross between a bulrush and a bamboo.

This one I’ll call the “Nigerian Carrot” because I don’t know the name of it and it’s tastes somewhat like a ‘softiga’ carrot. Actually more like a strange combination of carrot and pea pod. It’s crunchy like a carrot and doesn’t have much sweetness to it. After you peel off the outer shell, which is a strange shaped dark brown cover, you come to this beautiful smooth, orange/yellow fruit, it’s as smooth as marble.

In this picture you see the “Nigerian Carrot” and something they call a pear. It’s a cylinder shaped purple fruit that they boil before eating or they eat it raw. It tastes like avocados, not much taste to it and hardly any sweetness to it either. Not one of my favorites anyway. If anyone can tell me what these two fruits are called, I would sure appreciate it.

Every time I sit down and write this post I think that I have covered most of the fruits around here, but then I see a child go over to a tree and give it a violent shake and out of the sky comes this strange alien shaped fruit. Then I have to go find my camera and start asking questions and taking notes. So I’m sure this will not be the last post on fruit that I will write.

The purple fruit is called “Safu”, I think. I found a picture that looks very much like the one you show. Also, the author states that the fruit is “boiled for hours”. The author said that it was somewhat “bitter” and that it has a large seed which you should not try to eat. Does that sound familiar?

I tried looking up the other fruit, but it seems to defy all descriptions! Maybe somebody else can ID it. Good luck!

Wishing you all the best and God’s protection!

hi lance, you’ve made our mouths water once more! if only we could reach out for a taste, like Willy Wonka tried making possible in “Charlie and the Chocolate Factory.”
you forgot to post a picture of the huge, impressive mango tree. You’ll have to start taking pics. of vegetables also, or we’ll think they eat only fruit, rice and gari!

i better come and join u , because i like fruits just the same they seem to be before my nose ! Yummy !

Hey Lance,
You aren’t far. I want to tast all those fruits too. I have already tasted Mangos and they sure are good.

Since you have introduced us to the coconut and palm tree, I’ll share some interesting stuff that I read considering palm and coconut oil. I remember in one of your former posts somebody said that palm oil was high in saturated fat, well coconut is even higher in saturated fat! What I am about to write comes directly from the book,”Nourishing Traditions,” by Sally Fallon.
Of particular interest is lauric acid found in large quantities in both coconut oil and in mother’s milk. This fatty acid has strong antifungal and antimicrobial properties. Coconut oil protects tropical populations from bacteria and fungus so prevelent in their food sopply; as third- world nations in tropical areas have switched to polyunsaturated vegetable oils, the incidence of intestinal disorders and immune dificiency diseases has increased. Because coconut oil contains lauric acid, it is often used in baby formulas. Palm Kernel oil, used primaly in candy coating, also contains high levels of lauric acid. These oils are stable and can be kept at room temperature for many months without becoming rancid.
Remember everybody, I am not out to start a debate or anything, but rather to share some information that I found rather interesting!!!

Do you realise that the photo links are kaput? I would like to see them.

Yes we are aware of that….bear with us as we are experiencing difficulties. Thanks