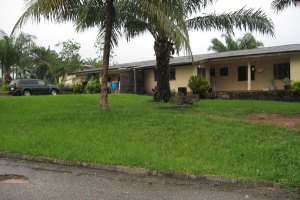 Since we’ve come to Palmgrove, we’ve been putting on a push to get the place cleaned up and looking nice. Things have improved considerably, but I must admit at times we do run into a brick wall or two and get quite frustrated. Like the time Reverend (Ifiok), a 25 year old guy, wouldn’t give me the truck to help the girls haul firewood. He thought I was joking and laughed his head off and I got madder and madder. Paul Vetter says that he has a key with him at all times and that next time I should just come to him. So now I can’t wait for next time! : ) These poor girls do everything with a wheelbarrow. No golf carts and gators here. Into a wheelbarrow and away we go. Even “Hof aufraume” we did with wheelbarrows. My mom and me spent two days doing that with the guys. My mom has this very effective way of getting people to do things. She starts doing something and then when people come to help, she lets them take over.

Paul Vetter and my dad bought a lawn mower. It seemed all the boys were ever doing was cutting grass and cutting grass, using a machete. It really is a waste of time and energy. It takes all the young boys (eight to fourteen year old) almost all day Saturday to cut just our front lawn. Although the bigger boys get it done better and faster, it still takes too much time. So we invested in a push mower. It works beautifully, but the first time it ran out of fuel, the operator parked it by our front door and left. Then my mom decided that she would take matters into her own hands. She sent somebody off for fuel and then she and me started mowing. In no time at all a small crowd had gathered, eventually we handed the lawnmower over to someone else. She stayed right there and told them what to do and what not to do. When the fuel ran out she had them running for more fuel and mowing away again in no time at all. Now that they’ve done it once, they’re smart enough to go get fuel on their own. : )

Two Saturdays later the grass wasn’t being cut again. So once again my mom took the lawn mower and started mowing. This time, thirteen year old Papa took over and pretty soon the fourteen year olds were running along beside him shouting directions and totally jealous. Since then we haven’t touched the lawnmower and the grass is always nice and short. The boys like the evenly cut grass so much that they come and play soccer in the yard to the left of our house, on a field full of potholes, all because the grass is cut so nicely. Now I’m planning on getting them to fill in the holes. : ) Then it would be a really nice field! Maybe we’ll get it done next week Nigerian time. lol

Let’s hope they don’t start wasteing gas now! Even though, it’s good to see that they’ve got a more efficient strategy for one of the more common tasks on most hofs. (In North America, anyhow)

ha ha!! so i am not the only one who loves to mow lawns!! thanks for sharing.

I’m sure they can be trusted that far! (Referring to the idea of them wasting fuel.)

So they are playing soccer… Could the World Cup have inspired them to do so or is it common?

Talitha
So Ifiok wouldnt give you the keys to the pick up! I find this rather amusing.
He most likely wouldnt have given them to any of the other Palmgrove girls either. Next time just ask him to drive!

Hi talitha, Sure seems like you are getting all worked in with those people..glad that it looks normal again..no work in vain eh…Keep the faith…and keep smiling

Sorry Talitha, but I couldn’t help laughing at the incidence where the guy wouldn’t give you the keys. Have you imagined how funny you most have looked to him! Why didn’t he give you the keys? Was is just an attitude on his part or is it uncommen for women to drive in Nigeria?