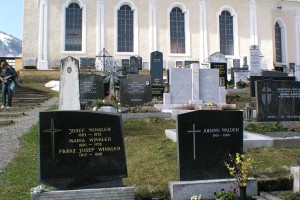 On Tuesday, we went to the village of Zlan. The Lutherans that joined the Hutterite Church went to church in that town. On the pews, in front of every person, there was a plaque with his last name on it. We found the Kleinsasser name, Hofer name and Waldner name, without the ‘n’. Somehow they forgot the ‘n’, all the grave stones outside the church also had it spelled Walder. There were some women in the graveyard, who were giving it a spring cleaning. We talked with them for awhile, and it seems they all knew something about the Hutterite’s history of that place. Talitha and I climbed up into the steeple to the church bells. Mensch! I’m glad we weren’t there when they started ringing! They are on an automatic timer, on top of every hour they ring the time. It would really have been ear splitting if we would have stood right next to them.

After that we went to the Wiesensee, which was a half hour drive up a narrow mountain road. This area is a small ‘seitental’ in the Karten mountain range. The Hutterites lived in that area, and because it was not in the main stream of society, they could keep out of sight better. That is also where they held baptism services; because it was so high up, there was still a lot of snow on the ground. Eddy V. and Paul V. tried nailing a birch tree with some snowballs! Lucky for the tree, they couldn’t hit the broad side of the barn from the inside! We ate a nice dinner there, and then moved on down the mountain to look for the Waldner house and Hofer house.

After asking around a few times, we finally found the Waldner house. The house number on the door is number 1, which means it’s the very first house in the village. Lynda Lederer knocked on the door and asked the people who were living there if we could take a look inside. As usually, the people go out of their way to show us around, and tell us of the history that they know. Note the small door inside the house, the people of that time must have been quite a bit smaller then today. After that we went looking for the Hofer house. Unfortunately, there was nobody at home, so all we could do was walk around and take pictures.

After that, we went to our hotel and had frische Forellen (trout) for supper. The fish are kept alive outside in a pond and are caught and prepared when you order them. We phoned with Astrid, letting her know that we were in the area. In half an hour she showed up with her parents and we had a nice long visit, till 11. We ended up talking about the moral standards of the country and how bad things have become. Eddy V. made a good job of explaining the Christian’s viewpoint on morals. In the end they said, ‘Nu jo, es is jo ach su.’ I’m sure they don’t get to hear it explained so well very often.