Written by: The Bridge on Tuesday, September 9th, 2008 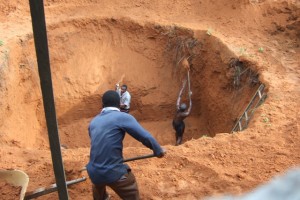 Here in Palmgrove one ends up finding many different ways of constructing things.  One that contrasts a lot with what I am used to is the Soak Away.  It really isn’t anything new.  It’s what professionals might call a septic field tank.  It is a big cement tank in the ground where the sewer of the house goes to.  The sewage soaks away directly from the tank into the ground around it.  That is because the ground around here is all sand which absorbs water really well.  In the time I’ve been here, I have never seen a situation where there was a puddle of water that wouldn’t be gone the next day.  This tank is purposely constructed so the water can seep right through it and that way they don’t need to make a sewage lagoon or plumb a septic tank.  Here in Palmgrove they decided they needed a second Soak Away for the big Idiong House they are building.

When thy first start with a Soak Away, they have to start with the blocks.  These blocks are mixed and poured in a shaded area because it is very labor intensive.  They are made with mostly sand, a little bit of cement and almost no water in it.  This is done so that the blocks can be removed from the forms as soon as the mixture has been packed into the form.  These blocks are very weak to say the least.

As mentioned above, blocks need sand and cement.  It goes without saying that cement has to be bought and one bag of cement costs about $18 USD.  The sand has to be special river bottom sand which has to be brought in with a “tipper” truck.  The river sand is washed and so it is very clean with no organic matter.  The cement, sand, labor for making the blocks and the delivery of the materials can cost quite a lot.  It is very important that a person only starts making a Soak Away if there is  enough money to make enough blocks.  This is often ignored as is evident by all the unfinished buildings one sees in Nigeria.

After all the blocks have been made, a hole is usually dug by hand.  This is quite the job.  It requires a lot of sweat, shoveling, standing around, talking, eating garry, drinking palm wine, and doing everything all over again if it rains in the night.  And rain it did.  The boys in Palmgrove would dig valiantly for half a day while the sand caved in almost as fast as they dug.  At one point I wondered how much sand they would have to shovel before they would realized that they needed boys at the top to shovel away the sand so the weight wouldn’t make the sand slide in from the pressure on top. Eventually they did just that and they were able to make more progress.  At least till it started to rain. It rained for two days and washed a lot of sand down the hole again.   It took a lot of additional shoveling before they reached the required fourteen foot depth. After the pit has been dug, the blocks are mortared into place.

These blocks are lowered down by sliding them down on two 2×2’s.  At first they didn’t know how it is done and they broke a few blocks before they figured it out.  After that the walls came up rather quickly, at least until the halfway point.  At that point braces have to be put into place.  Because the blocks aren’t strong enough to be used as braces, they have to pour a high quality cement mixture with re-bar to strengthen it.  It is only after the braces have been cemented in, that the blocks can be continued.  These braces are to prevent the walls from collapsing inward.

The walls are then plastered over with a strong mixture of cement to make the blocks able to resist erosion.  After this the Soak Away is filled up half ways with big rocks.  These are placed so they prevent the walls from collapsing inward with time.  Then a lid is formed with rods and cement and placed on top.

It isn’t uncommon for a Soak Away to collapse like the one  behind one of the houses in Palmgrove.  At that point it is best to simply shovel it full with washed river sand and build a new one.  The reason good sand is used is so there will be no shrinkage.  If a collapsed Soak Away isn’t filled, it will eventually affect the foundation of the house beside it because they are built very close to the house.

The questions I have are: where does the sewage soak to?  Does it soak right down to the aquifer?  Does it seep right to the well bore hole?  All I can hope is not.  If it would, we would soon suffer from exposure to ecoli.  The bore hole is far from any septic field and for now it seems ok.  However, there are times when we run out of water and all the underground pipes stand empty.  That means that if there were water around it, it would soak right into any of the cracks in the pipes, as there is no positive pressure to keep it out. Soak Aways are common everywhere and they are a lot better than letting the sewage run into the river.  The river is the main source of water for the vast majority of the people.  And then again, the native people can drink from the river and don’t seem to get affected by it.  Maybe their immune system has had generations to develop protection against drinking contaminated water. All I know is that a Soak Away seems like a good idea; but it is a lot of work.

well thats… different! but if it works then it works. kohst nix! 😀

Seems to make more sense to build a Soak Away with the strongest bricks that can be made instead of having it cave in eventually and having the work and expense of building a second one. Interesting blog
Have you ever considered writing a blog about all those different churches in Nigeria ?

Funny. I always wondered about “sock-a-way” as it sounds when I hear it.

However, I was told by an engineer friend that the waste just decomposes and turns to sand.

My dream house in Nigeria would have solar panels so I don’t have to worry about electricity.

Actually “septic fields” as we call them here in canada. are quite commen. aspecially in the country. Lots of farmer have them, and yes they do soak down into the aquafier. theyr outlawed in most places. We definatly wouldnt wish palmgrove and the missionaries any ecoli on top of everything else they have to endure.