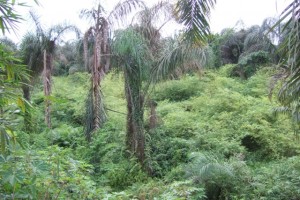 It seems you can get used to anything.  If your palmwine has a little worm floating in it, just flick it out, or strain it before drinking.  I have to admit, I haven’t forgotten Talitha’s dire warnings of “don’t drink the palmwine”, but now I say- you just got to know how to do these things!  Let me give you a brief but somewhat complicated description of Palm trees.  I say complicated because I’m not 100% sure I got all the facts straight and it sure took a lot of questions, imagination and time to figure out this much.  Getting facts around here is something which takes a lot, and I mean a lot, of patience and persistence.

There are 3 trees you can get palmwine from: the palmwine tree, the palmfruit tree and the coconut tree.  The first we’ll discuss is the palmwine tree, the palm tree which is not good for anything except palmwine.  There are fewer of these trees around and they don’t look as nice as the regular palmfruit tree.  They tend to grow near streams and rivers.  Here is a picture of some palmwine trees. They have these nuts growing down from the top and they are not trimmed nicely so they look straggly and unkempt.  They extract the wine while the tree is living and standing.  The tapper will climb up and somehow make a little fire on top of the tree, attaching a big plastic jug, and getting the wine out that way.  Once they will have extracted the wine, the tree will eventually die.  They can get palmwine for about a month. Also, these nuts will only grow after the tree has been tapped, so to speak.  I haven’t seen this happen; I only sometimes see a little curl of smoke rising from somewhere in the jungle. Then I know another tree is giving its life so the people can drink some palmwine.

Compare the palmwine trees to these good looking palmfruit trees.  These trees are old already; let me guess, about 20 years, and have been trimmed regularly.  Here is a picture of a young palm fruit tree that has not been trimmed nicely. The inner part of the leaves have been left on, simply because this tree is short enough yet so it can be climbed with a bamboo ladder, and therefore the owner hasn’t needed to cut the leaves flush with the trunk.  I imagine the day will come when they will have to cut it so the trunk is smooth for climbing.

To get palmwine from the palmfruit tree, they first chop down the tree.  These

boys can chop down a big palm tree with nothing more than a machete. If I tried to do it, it would take me a month of Sundays… to say the least.  Then they trim off the leaves growing out of the top.  Then they leave the trunk lying there for three days and on the 3rd day you cut a precise, square hole where the leaves were, cutting it just so, not too low or too high.  This takes someone older who has done it many times.  Then you have a hole that fills with palmwine and you can get a few liters each morning and evening for about 2-3 weeks.  Just fish out the wine and cover the hole so the flies don’t finish it.  I find the wine is good and sweet if I drink it right out off the tree, strained of course.  Right away the wine is like juice, no alcohol.  But I wouldn’t dare drink it if it were older than a day because it does not agree with the white people’s system somehow.  They tell me that in order to have alcohol, they must make a fire like they do with the palmwine tree.  You can add any of numerous leaves, or you can boil it and infuse the leaves that way. This  makes for a good tea.  I’m always told palmwine is good for the eyes; who knows how true that is or isn’t!

Then of course, we have the third palm tree, the coconut tree.  Interestingly enough they tell me it is possible to make palm wine out of this trunk too if you cut it down and apply the same method as with the palm fruit tree.  It sure seems that God didn’t waste anything; it’s like there is always something more that can be done with one product.  Of the coconut tree they say the taste of the wine is different, a lot sweeter.  We asked why they don’t tap the trees, like we do our maple trees at home, instead of cutting them down.  It seems that in some areas they do that. Maybe the idea just hasn’t reached this part of the country yet!  It sure makes me shake my head whenever they cut down one of the beautiful palm fruit trees. Its not that they do it on a whim; they don’t cut them unless they have a reason.  Like lately for example, management decided the shade these trees made wasn’t letting the grass grow and therefore caused erosion, so the boys cut about 8 of them!  Down by the chicken barn they macheted about 6 palm fruit trees and near the fish pond they cut 2 palm fruit trees. One mango and also one large avocado tree in the middle of the Hof had to go.  What we wouldn’t give to have such bountiful trees in our country!

Right now I’m enjoying grape wine made a few years ago. Medium sweet with little fizz. Do they have fruits in Nigeria comparable to our grapes, strawberries or raspberries?

Nice storrie Lee…but,I think I would rather not have any wine…. if it took killing a tree to get it….do they ever make any other kindes of wine?…. sth

I can’t see why they would go about cutting down those trees 🙁 They sure make nice shade. Growing grass dosn’t sound like reason enough to cut them down. Planting more would be a better idea then cutting them down!!!

Palmwine? I think we all would like to give it a shot… errr try. Sounds interesting. About how much Palmwine do they get from a tree?

What a waste, cutting down a mango tree! What about the fruit on the trees?

Hey Lee, Brian,
Nice to hear from you again, Hmm seams like you find a way around everything.. everybody tells you not to drink there Palmwine and you somehow find a way to get around it and enjoy it, Good for you, pretty soon you 2 will be happily eating “Gari” and having a Glass of 20 year old Palmwine to top it of, Cheers you 2 have a Great one and keep us posted..

Hi Leanne and Brian
Jordi and I are only a couple of hours flight from you guys. Maybe we could drop by for a sip. Oh well, if it doesn’t work, we’ll just have to be content with German wine!!

Hello Leanne,
You don’t know me. I’m outsider. I’ve been visiting ”Crystal Clear“ on Sundays for about one and a half month now, thanks to the warm welcome of your family and the hall community. I’m learning Hutterite way of life based in Christ. .
As I read you blogs I’m thinking: “that is one tough Hutterite cookie!” lol!
I’ve volunteered in India and that was tough. So lots of admiration to you guys for what you do other there and even more for keeping your faith as your guide.
I can’t wait to meet you in person!
Both of you stay well and I’m sore Lord is watching other you
Irina.

Hey Leanne, great blog, interesting. Though i have to wince when i see them cut down those trees, considering how hard it is to grow a tree around here!!
Thanks for the enlightening blogs…

Is like you find it very hard to believe that we in Nigeria can cut down any tree no matter the kind of fruit it bears. Its not a crime because we value palm wine more than any drink especially we in Akwa Ibom state. So dont feel bad. Well you people have tried to know much about us here in Nigeri, KEEP UP.