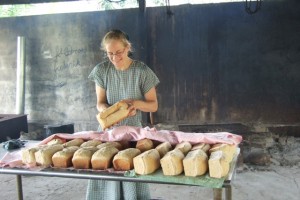 On the first of April, Anna and I decided to try our hand at baking. In 2000 Eddie Vetter from Cascade and his son, Cameron, made a big wood oven from scratch. They welded it together, fashioning it after one they saw that Nigerian bakers used to bake. It has two racks inside and you make a fire under it. Anna says they got to use it once before they left for home.
First we lit the fire under the oven, assuring that we had big logs. We measured our ingredients, nothing fancy, just the basics, oil, eggs, salt, sugar, water, yeast, honey and white flour. Measurements weren’t accurate; we just judged. It was hard to ‘knet,’ knead, by hand. We had bitten off a bigger bite than we could chew!! We would have liked the dough to be tougher, but our arms were tired. Oh, well, good enough…. Something we find ourselves saying a lot here!

After cleaning our bread trays and leaving them in the sun to dry, we piled them into a wheelbarrow and hauled them and the big bowl of dough over to the dining area where we made them ready to put into the trays. Then we carried them into the kitchen, and set them down right beside the oven to rise. It took about an hour, during which we quickly kneaded a batch of buns. Once we delicately piled the bread into the oven, we let them sit inside for about ¾ hour then it was out onto the table to cool. Turns out, the loaves had big holes; we blame it on the soft texture of our dough and maybe we should have baked it sooner. To me the bread was rather bland, but we had it at breakfast the next day and everyone said it was “powerful and strong” bread, translation – they liked it.

Then we baked our buns. By then one of the women had informed us that we should rotate the pans after 15 minutes or so and switch racks, so we did that, and the buns baked nicely. They were a lot better than the bread, I thought! An oven thermometer would come in handy; then we would have an idea of how hot the oven actually is.

Well, now they want us to bake more often, which we sure wouldn’t mind doing. We plan on baking another batch this week. The problem is, a big bag of flour costs over 5000 Niara, and when you don’t have money, it is a lot. Whenever they want to have bread for breakfast, Ita the Hausholter, gets up around 6 and drives to town for it. We needed to figure out if it’s cheaper to do it that way, or to bake it, and I believe it’s cheaper if he goes every time to buy it. And in that case, I’m not sure how much baking we will do! We’ll let you know if we try baking a batch of Duncan Heinz…. Mmmm, did someone say cake?

(“…. So the people took their dough before it was leavened, having their kneading bowls bound up in their clothes o n their shoulders….” Exodus 12: 34)

Let us know if you try another batch, after all, they do say Practice Makes The Master. 🙂 You could try adding raisins or dates or some other dried fruit to kind of turn it into a gepach. It won’t quite be Duncan Heinz, but one has to improvice. (A) As for the bread part, how difficult would it be to find whole wheat flour versus white? Just thinkin’ it would be more nutritious…
mit liebe

Leanne, you are in your element!!… doing what you can do great, like baking sweet goodies for your friend! keeping you in my thoughts and prayers. i check every day to read updates from you. Gott mit euch!!!
love and hugs, da Lorraine

Whats better then home baked bread anyway? Pretty soon you will have them coming back for seconds! Then they will come asking for baking lessons! You could start a baking class in school for them!:-)
-dw

Leanne, I can hear you saying mm mmmm mmmm! I know how much u love the smell of freshly baked bread – but where is the milk to glaze over the top of the loaves? Es sure stet dir oh! We really appreciate the blogs and watching your tan develop 🙂 Thinking of u and God be with u.
M.G.

raisins? dates? my experience with that was they spit them out! and brown bread? don’t even try it, they like it WHITE and only white. it’s just us white people that want it brown. now that anna isn’t here i find it daunting to go bake some more…but i think i’ll try it! and my tan? i like watching it develop too!

The wood stove you see in last picture of blog entitled >Bread and Buns by Leeann is specially built to maintain heat. The inside bread compartment and outside skirt were built separately. The inside being four inches smaller on left, right, back and top. Fine sand surrounds all sides and top except front and bottom. Bakes for an extended length of time even after fire has gone out. Did we paten this sophisticated piece of art? No not yet.

Someone asked about the financial feasibility of baking, verses buying. Here goes.

1 sack of flower costs 5000 Niaria, Approx $50 USD, can bake 175 loafs at 28.5 N per loaf plus a few buns or sweet cinnamon rolls for the munching with left over dough. We can bake for 5 breakfasts with this one sack of flower. These Loafs the Sisters bake are about 20% smaller then the loafs Etta Johna the steward buys every morning, if and when he gets his motorcycle started. Plus the Nigerians say our home backed bread is more nourishing and filling then the bread from town, proven by the 4 to 5 hours they put in during planting season promptly after breakfast

Your question is, why don’t we bake bread every day at such almost half price. Nice question. Money is always scares and not always available, nor do they have breakfast every morning. Hope I helped u some.

Lance, in one of his blogs talked about planting a garden and I havnt heard how that turned out. Can they grow Wheat, Barley, or Corn (Maize is what they would call it there I assume) maybe you can grow your flour there for cheaper, just a thought.

God grant you wisdom, (and even luck) to overcome all obsticals.

Llyod, they can grow corn around Palmgrove, they grow quit a lot of it. Peanuts also grow well there. The wheat, barley and a lot of the vegetables are grown in northern Nigeria where it is a bit cooler for crops like that. They ship the small grains south from Northern Nigeria, in return southern Nigeria ships palm oil north. I think almost anything will grow in the south too as long as you have a variety that is suitable for that climate.