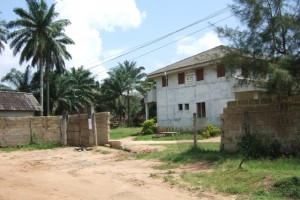 Palmgrove Community is building a new school house.  The arrangements for this has been going on for quite a long time.  It has only been in the last month that the actual construction has been taking place.  The organization that has been handling this project, or rather controlling the spending is Word Wide Christian Schools.  The real donor of this school could be said to be Don Tingent.  He and a number of other people were responsible for getting a house built by volunteer work.  The goal was to build a house with as much volunteer work and donated building supplies as possible.  This house would then be sold and the profits would be used to build a school in Africa.

The profits of this house were handed over to WWCS to build a school house in Palmgrove.  Don Tingent has since passed away but his vision has continued and through the people he worked with and WWCS it has been possible to get this school started.  WWCS manages funds for many organizations and their goal is to build Christian schools everywhere possible.

had been started a few years ago, but never got far because of the lack of funds.  It is on this foundation that construction is being continued.  The building will have a computer lab, kindergarten 1, kindergarten 2, offices for the teachers and store rooms.  The building will be a one story building which seems to be the preferred style for schools  in Nigeria.  It will be built right next to the second school building on the premises.  The organization has a few requirements for this proje

ct.  One of the requirements is that Palmgrove will have finished twenty percent of the project before a certain date.  By that date someone will come to see how the building is progressing.  All that means, is that someone is coming to check to see if the place is real and that the money is being spent on what it was sent for.  This person will be staying for three days to see how things are going.

been started and the walls are coming up nicely. Because of the short deadline, Palmgrove has decided to hire all the work out instead of using their own men to do the work.  In this way they feel they will get people who do that kind of work every day and are very skilled at it.  It should also be noted that a lot of the men in Palmgrove don’t have very good work ethics and that this would affect the deadline.  There are four people from Palmgrove working on this project. One of these is Quipo, one of the ministers in Palmgrove. He is responsible to see that everything is don

e correctly and finished on time. He is also responsible for hiring the workers.

Nigeria has a problem with employment and so in very little time he had all the workers that he needed.  He also arranges buying all the cement and sand that is needed.

The building is being constructed with cement blocks.  That requires a lot of blocks and so most of the hired people are busy making them.  These are made using only cement and sand.  That makes for very weak blocks.  These are then mortared into place.  One hired person is expected to make at least one hundred blocks in one day.  It is very hard work, as is evident by their sweating.  These blocks will later be plastered with a stronger cement mixture to prevent them from eroding because of there weak mixture.  The same goes for the floor.  It will mostly be shoveled full of sand after, which it gets a one inch layer of cement on top.  They feel that twenty percent of the building means having block walls without plaster up to the roof line.

Of course everything has to start with a dream.  Palmgrove’s dream is that they will be able to build a dormitory next.  A dormitory would allow students from far away to enroll in the school.

In this way the school would get more students, and charge more for the students that live in the dormitory.  With that extra money they would be able to hire better teachers and maintain a better school. Palmgrove would have to supply electricity, water, food and security to the student that live in this dormitory.

Something that needs explaining is that this donation from WWCS can only be spent on building a school house.  Palmgrove still doesn’t have communal dining.  It seams strange that with all the construction spending going on that there still aren’t any means of supplying food for communal dining.

School starts in September and with that the big school gate has to be completed as well.  The gate itself has arrived and is being installed.  It was built in a typical Nigerian style.  Most of the gate is constructed from used shipping container steel cut out of one of the containers that was shipped to Palmgrove many years ago.  It’s surprising how nice something can be built using container steel. I get the feeling that it is mostly for show as only the walls in the front part of the school are made of blocks.  The walls at the back of the school are built with wire and have the occasional hole in it.  The school management felt that a fancy gate was needed to give the school the image it needs.  Palmgrove School is also trying to get a website together before the school opens.  This is also being done as a marketing tool.

It is hoped that by expanding the school there will be more to offer.  The big problem will be managing the school in a balanced manner.  For now at least the school yard is very active, not in learning, but rather in using skills that have been learned.

I was wondering if the students that come to palmgrove are ever disruptive or inconvenient for the community.

I can hardly imagine a thousand kids going to school at our communities.

As always your blogs are very informative. Why build a dormitory ? Is there actually a demand for students from other states in Nigeria to study at Palmgrove or are they “building on hope”. I never met Don Tingent but heard about him from other missionaries. Seems to me that the Palmgrove School is one of the “success stories” at least in the eyes of the Palmgrove people and thats why they want to continue to invest in this area.
Blessings

Interesting blog Brian, good thing Palmgrove is a sandy area and not good ol’ crystal clay, they do many things with their sand!!
Take care