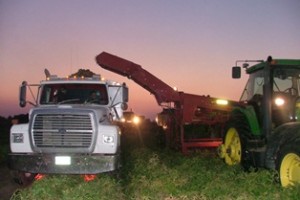 “Trucks are waiting! Everybody welcome. Thank you!” The crisp message rings from the public address system, inviting colony members to a shift of picking weeds and lumps of dirt out of newly-harvested potatoes, traveling by conveyor into the shed.

“This is a recorded announcement!” One young woman deadpans. Grabbing gloves and a jacket she heads for the potato shed.

Every autumn brings the exciting racket of tractors, trucks and potato diggers rattling and rumbling their way to the potato fields. Here three generations gather to work on one project. Even the children help to harvest the brown-skinned, white-fleshed Russet Burbank potatoes, commonly used for French fries.

In the field two John Deere tractors prepare to start, one pulls a four-row digger and the other a three-row digger. These massive machines driven by Jake Hofer, the potato manager and his helper, Marvin Waldner, drive slowly up and down the field. Each digger conveys the potatoes to a Ford truck moving alongside, while the plants are returned to the field.

A fleet of two Sterling and three Ford trucks transport the potatoes to the concrete shed where they are unloaded into a huge even-flow bin. Its capacity approximately two tandem trucks of potatoes, this bin ensures an even flow of potatoes unto the grading table.  In dry conditions, such as this year, a clodhopper is used to eliminate dirt-clumps.  In years when it’s been too wet, this machine cannot be used as the wet earth would clog the machine.

At the grading table four people work quickly, taking out as much dirt as possible. As the potatoes tumble unto a conveyor, children and adults continue the task. “Try to get all the dirt and small and green potatoes.” Mark Hofer, the foreman instructs. “We don’t want undue dockage at shipping time.”

Finally, the conveyor drops the spuds onto the hopper of the piler, which moves them into the shed. This telescopic, arm-like conveyor is remote-controlled, and moves from side to side and up and down, creating a neat pile, which fills the shed to capacity.

The potato shed requires the most workers: children, teenagers, fathers, mothers, grandfathers and sometimes even Grandmothers work along the conveyor. The result is a jovial atmosphere and tons of relatively clean potatoes in storage.

This scene brings to mind Hans Kräl’s description of community, a Hutterite elder in 1569. “It was like the work of a clock when every cogwheel drives another and everything turns in an orderly way, or like a hive of bees where all work together, some making honey, some making wax and some carrying nectar to the hive.”

“Kevin, tell me once more,” a Dien, young woman grins. “How many orders of French fries does this shed hold?”

Some years, because of all the rain, the star table on the grading table gets clogged with dirt more than usual, requiring frequent cleaning. On one such year, Kevin climbed up and began unclogging it. Intent on finishing as quickly as possible, he didn’t notice a frayed piece of his coveralls snagging on the moving parts. Abruptly the machine grabs the sleeve and rips it off. Fortunately someone close by pulled him away and stops the machine, without serious harm. “Let this be a reminder for all of us to be more careful.” a grandfather admonishes. “It could have been much worse.”

Once the shed is full, the door stays sealed to maintain a temperature of 9° Celsius.  From a pit under wooden floor slats, gigantic fans circulate air up through the potatoes. A humidifier ensures 98% humidity, to prevent shrinkage. This way, healthy potatoes can be stored from September to August of the following year, without spoiling. After they are shipped, the shed is cleaned and disinfected.

An average crop yields about 365 bags per acre, we’ve seen projections close to 417, but this year it’s around 300.  Yields fluctuate annually, depending on growing conditions. Potatoes thrive in cool weather, with cool nights especially crucial. Too many hot days, with no night cooling, stifles growth. Potatoes also need at least an inch of water per week, so irrigation is essential.

Since potatoes are prone to disease, primarily Blight, growers have to be vigilant and take preventative measures, including fungicide spraying every eight days during dry conditions and every five days during wet conditions, starting when the potatoes are about 30 centimeters high. In severe cases, the only option is watching the hard work and investment disappear under a plow. To prevent Blight from spreading when there’s only a touch of disease, there’s an expensive solution of spraying the potatoes as they go into the shed. “When you haul these potatoes to the processing plant,” one farmer joked, “Don’t stop for coffee. You simply can’t afford it.”

With good weather, our 600 acres of potatoes can be harvested in approximately two weeks. Normally, digging begins around September the 15th, but certain conditions deter us. Some years the middle of September was too warm. The ideal temperature for digging is approximately 18° Celsius: it is best that potatoes are cool upon storage. This year’s harvest start should be pretty close to ideal. Poor weather can prevent or delay potato harvest before heavy frost damage. “You girls at the grading table, let your hands move as fast as your mouth!” Andrew hollers. “Do you want to be here till Christmas?”

“Oh, bring me a potato perogie!” Someone starts singing to the tune of, ‘We Wish You a Merry Christmas,’ in hilarious response.

At the end of potato harvest, everyone enjoys the sight of trucks, tractors and diggers returning to the colony. That evening we celebrate with a barbeque supper, scrumptious baked potatoes with sour cream and a tossed salad. After a cream cheese dessert, everybody joins in singing a German evening hymn, thankful for food on the table, but even more for the blessing of those who we live, work and celebrate together with, on the Prairie of this land called Canada.

Hi, are you a member of a “Hutterite” colony? Please write back i have some questions to
ask about the Hutterites.

I think that your way of life has much to offer by way of example to others. I enjoyed your writing and it has good humor and reality. (Don’t tell the elders) It is always hard for people to wrest with change and with faith. I believe that one can be faithful and change. Please keep writing, you have a gift.

dont know who is reading dont know what happened but i had an opiffine?? sry cant spell..I feel a guiding toard your colony I am sorry i cant spell well… I need an elder or a woman of the church and god to speak to me.. I spoke in toungs and the lord spoke please talk to me at e-mail Kaylanarenee@hotmail.com this is no joke

I like your website and I liked the NatGeo documentary – I know a lot was taken out of
context but it at least showed how great the Hutterite folks are even if it did not come
off that way. What I would like to see on your website is Recipes! I am sure some of
them have been passed down from generation to generation and probably wonderful!!

God Bless all of you

I watched that show for the first time tonight. I thought it was a fact based documentary. 🙁
I was awful and full of lies, I live surrounded by colony’s and enjoy the decent hardworking man women and children in our rule community.
Those on TV do not fallow their faith, shame on them.
Love to all
Winnie Green

Hello
Have interest in buying meat hogs for our California Custom slaughter plant in Goshen, CA. My contact number is: Tommy DeFreitas – Cell # 559-246-2826
Thank You for your time!